10 Facts You Need To Know About Def Leppard’s Hysteria

Pour some sugar on me! Check out these 10 Facts You Need To Know About Def Leppard’s Hysteria to get hyped for the power rock legend’s headline set at Download 2019.

Def Leppard  are set to play their iconic 1987 album Hysteria in full when they take to the Main Stage at #DL2019. We’ve run ‘Run Riot’ through the band’s history and dug up the facts you need to know about this genre-defining monster of an album.

Def Leppard’s third album, Pyromania, catapulted the band to the top of the charts in 1983 and sold six million copies in that year alone. The long-anticipated release of its follow-up, Hysteria, in 1987 sent the band’s career stratospheric with the record charting at Number 1, on both the UK album and US Billboard charts, and going on to sell a whopping 25 million copies to date.

2. Spandau Ballet were their drinking buddies for the album’s writing sessions

In 1984, at the suggestion of their Irish lighting engineer Phay McMahon, Def Leppard decamped to a house near Dun Laoghaire in Dublin to start writing the album. In the evening, after the writing sessions, the band would head into town to a club called the Pink Elephant and sink drinks with none other than 80s new romantic poster boys, Spandau Ballet. They even took part in a charity football match with the ‘Gold’ chart-toppers.

Luckily, the guys did get some graft in and the writing sessions would prove to be legendary with the band penning and recording demos for Hysteria classics: ‘Animal’, ‘Women’, ‘Don’t Shoot Shotgun’ and ‘Gods Of War’. Cheers to that. 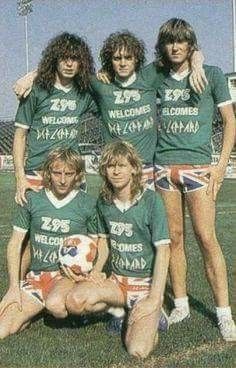 3. Three producers worked on the record including the band themselves

The band started work on Hysteria with longstanding producer Robert  ‘Mutt’ Lange, who’d added his production finesse to their two previous albums: 1981’s High ’n’ Dry and 1983’s Pyromania. Unfortunately, when it came to recording Mutt bailed on the boys citing exhaustion, so the band recruited Meat Loaf Bat Out Of Hell producer, Jim Steinman, instead.

Steinman and the Def Leppard had very different work ethics and the band ended up firing him; they thought Steinman was more interested in redoing the studio’s decor and getting back to working with his beloved Loaf than producing their record.

Speaking to Louder, front man Joe Elliott explained: “He [Jim Steinman] was thinking about Meat Loaf’s next album. We were paying him not to turn up. Then when he tried to have the carpet changed because he didn’t like the colour, that was the end of it”.

For a short time after, the band tried co-producing the album themselves with longtime studio engineer Nigel Green. Luckily in late 1985, a rested Mutt gave the band a call and said he was ready to come back. The rest is history.

Producer Mutt Lange’s vision for the album was to make a hard rock version of Thriller. The idea wasn’t to get the band to master the moonwalk, but to make an album that crossed over with the mainstream and was full of big radio-friendly singles.

5. The record was triumph over tragedy

Def Leppard’s previous album Pyromania took a short and sweet 9 months to make, whereas Hysteria took over three years to finish after a series of unfortunate events.

The first setbacks happened with Mutt Lange being unable initially to produce the album and the fruitless sessions with Jim Steinbeck, but much worse was still to come.

Tragedy struck on New Year’s Eve in 1984 when drummer Rick Allen crashed his Corvette Stingray, whilst driving with his girlfriend near Sheffield; he was flung from the car and his left arm was severed by the seat belt. Thankfully, Allen survived and with admirable determination and unrivalled vision he would return to the band to play the drums.

Nearly exactly a year later front man Joe Elliott fell ill with the mumps and lost two stone. Shortly after Mutt Lange, back at the helm as producer, was in a car accident and had to stay in hospital for three weeks with critical leg injuries. Like Allen, Mutt wouldn’t be beaten and moved his hospital bed into the studio to continue work on the record.

This barrage of bad luck could make other bands break up, but it only galvanised the Sheffield rockers to get back in the studio with Mutt and finally finish Hysteria.

6. It was the first album to feature drummer Rick Allen’s custom kit

After his accident, Rick Allen had a custom electric drum kit designed by Simmons drum company. He rejoined the band in the studio less than six months later and astonished the band by playing the beginning of ‘When The Levee Breaks’ by Led Zeppelin.

Allen’s first live performance after the accident came on 16th August 1986, when the band took a break from the studio to play Download’s Donington Park predecessor, Monsters Of Rock. Speaking to Music Radar, Allen remembered: “Donington is a crossroads in my life…That was where it all changed for me. That was really scary. I didn’t think I could pull it off. But to feel the warmth of a crowd like that, just feeling the sense that they wanted me to succeed and feeling that encouragement was just incredible. What a moment.” 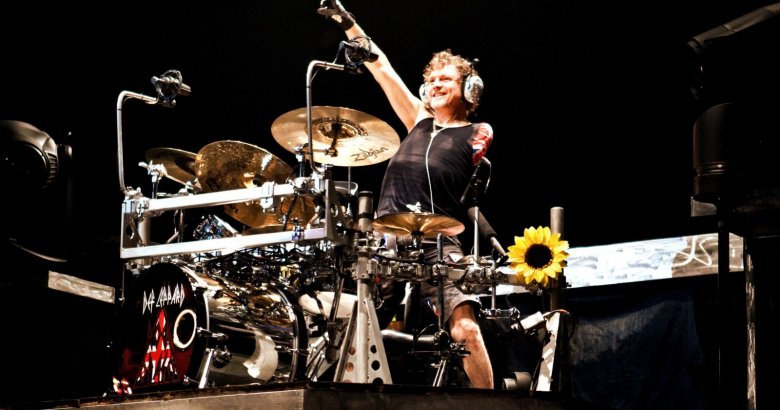 Taking three and a half years to record Hysteria meant that the normally frugal Def Leppard racked up an eye-watering price tag for the album: Rick Allen’s accident, the firing of Steinman which came with a hefty bill and Mutt Lange’s painstaking perfectionism (‘Armageddon It’, alone took three months to mix) all added to the costs. Guitarist Phil Collen has said that when the band released the album they needed to shift 5 million just to break even. With the record going on to sell five times that amount, it was worth every penny.

8. Hysteria wasn’t the first name for the album

Have you heard of Def Leppard’s album, Paranoia? You wouldn’t have as this was the joke name for ‘Hysteria’, which also at one time had the working title, ‘Animal Instincts’.

Reportedly the band decided on the name Hysteria after drummer Rick Allen shouted out during the recording of the title-track, “good words in the newspaper – Hysteria”.

The name Animal Instinct would go on to become the title of a book published by the band, written by Rolling Stone magazine’s David Fricke, about the recording of Hysteria and the tough times the band went through in the ‘80s.

9. ‘Pour Some Sugar On Me’ nearly didn’t make the album

Unbelievably, one of Def Leppard’s biggest songs nearly didn’t make the album. The band were putting the finishing touches to ‘Armageddon It’ when Joe sang the infamous words, ‘pour some sugar on me’.

Speaking in a radio interview, guitarist Phil Collen said: “The record company went crazy because we’d spent all this time, and Mutt said, ‘You know what? I think this is going to be the most important song on the record”.

The track took just ten days to record, a sprint compared to the marathon recordings of the other album tracks and had some unlikely inspiration: country and hip-hop. Mutt Lange came up with a country-tinged intro guitar riff, which Phil Collen gave his own twist by playing it with a metal guitar pick.

With Aerosmith and Run DMC riding high in the charts, Lange also gave the inspiration for the vocal delivery after according to Phil Collen saying ‘let’s make it a kind of rap’.

10. The iconic album artwork almost featured an eagle, a lion and a shark

Andie Airfix, the legendary designer behind album artwork for Metallica, Led Zeppelin, The Rolling Stones and more, was tasked with creating the album artwork. Originally, he’d envisioned that the artwork would have an eagle, a lion and a shark blending together – after being told the record would be called Animal Instincts.

With album title changing to Hysteria, the eagle, lion and shark were sent packing and Andie designed a new cover with the outline of Def Leppard’s triangle logo as the centrepiece. Speaking to Louder he explained, “The full-on face we used is almost human, but the side view isn’t, retaining the animal aspect. The idea was that this thing turning around to face you made it scarier.”

Don’t miss Def Leppard when they headline Download 2019 and play Hysteria in full. The rock icons will be joined at #DL2019 by fellow headliners Slipknot, Tool plus Slash featuring Myles Kennedy and the Conspirators, Whitesnake, Rob Zombie and many more.