We’re here and we’re more metal than ever! Find out what happened on Saturday at #DL2017.

Opening the Main Stage on the second day of Download Festival is no easy feat, yet Creeper looked right at home on the huge platform. The Southampton band, who are known for their theatrical presence, took to the Main Stage like ducks to water.

The furiously fast ‘Black Rain’ was the first song the band belted out for the day, taken from their acclaimed debut album, ‘Eternity In Your Arms’. The crowd sang back every word with the same passion expressed by the band themselves.

Ending on ‘I Choose To Live’, it’s clear to see that this band will return to Donington higher up the bill in years to come. 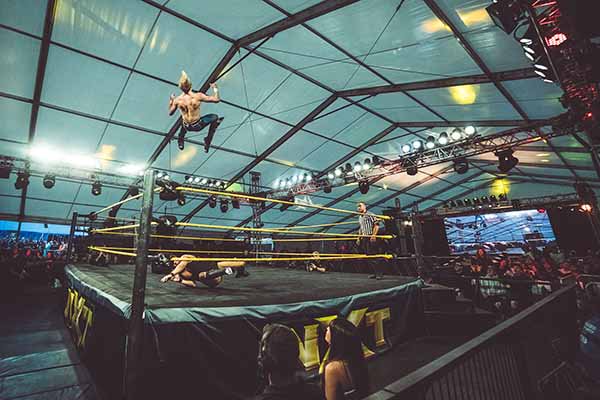 Over in the NXT Arena, questions were flowing for Ruby Riot, James McMahon from Kerrang!, Will Gould from Creeper and Aleister Black. Fresh from opening the Main Stage, Will gushed about growing up watching Stone Cold Steve Austin, which was met with screams and shouts of the signature “WHAT” from the NXT audience.

It wasn’t long until there was more action in the NXT Arena, but this time it wasn’t in the ring. Cue the most metal proposal ever, between battles, there was another ring that made an appearance; Emma and her now financé’s! 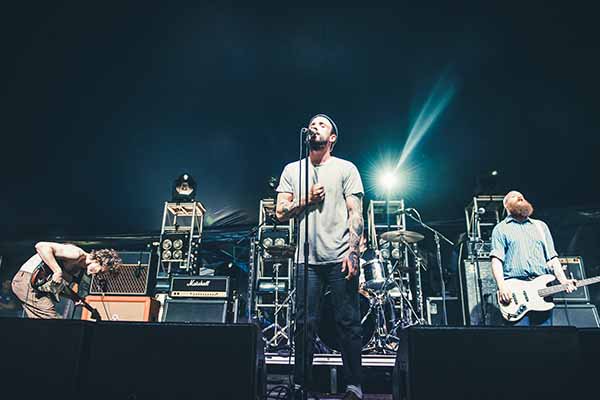 Bristol four-piece Idles took a rabid bite out of the Dogtooth Stage with tracks from their acclaimed debut album, ‘Brutalism’. Frontman Joe Talbot stalked the stage with a dead eyed intensity as they thrashed out the expletive euphoria of a track, ‘Mother’. The ferocious maelstrom of album opener ‘Heal/Heel’ got the crowd out of their afternoon slumber to mosh along. Closing with an extended play of ‘Rottweiler’, with lead guitarist Mark Bowen jumping into the crowd, Idles came, saw and conquered.

Every Time I Die 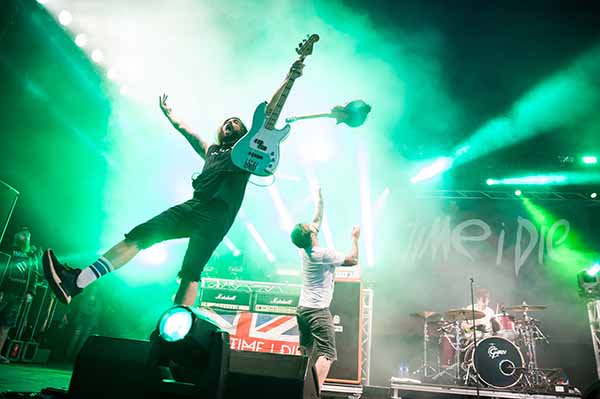 Pure. Savage. Rock ‘n’ roll. There aren’t many more words that could justify Every Time I Die’s set on The Avalanche Stage. Their riff heavy set opened with ‘Glitches’ before sliding into the huge ‘It Remembers’. With almost 20 years of experience, the New York band have never gone out of style. With Keith Buckley declaring “we’re the most handsome band on this stage today”, their tongue-in-cheek wit doesn’t go astray as they smash apart a tent filled to bursting. The crowd certainly left feeling happy having witnessed the carnage. 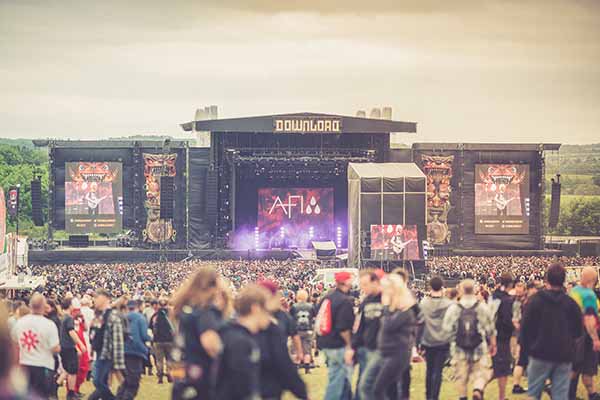 It was a long time coming – and you could tell from the crowd’s eagerness to push to the front, waiting with baited breath – to see AFI take the stage at Download for the very first time. Davey Havock has a majestic air about him, as he’s always done, throughout their theatrical display – which included the likes of fan favourites ‘I Hope You Suffer’, ‘Silver and Gold’ and, of course, ‘Miss Murder’.

A Day To Remember 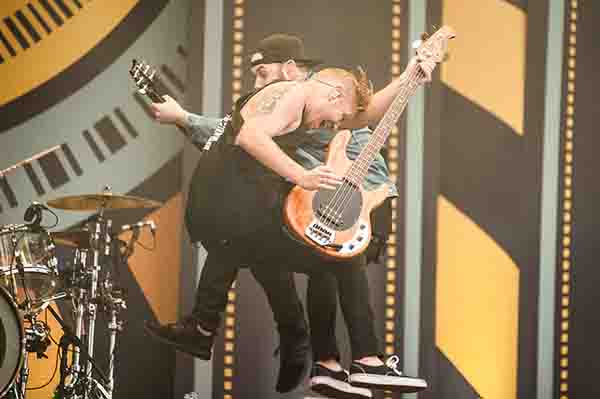 Hailing from Florida, A Day To Remember stormed the Main Stage on Saturday bringing one giant party to Donington. Opening with ‘All I Want’, it’s clear the band are on top form, with Jeremy McKinnon leading the audience into a crowd surfing frenzy. ‘A Plot To Bomb The Panhandle’ saw fire surging from the stage and the crowd dancing in its masses. Ending with ‘Naivety’, the crowd went wild with beach balls galore and – if you we’re lucky enough to catch one – a t-shirt cannon firing out fresh shirts! 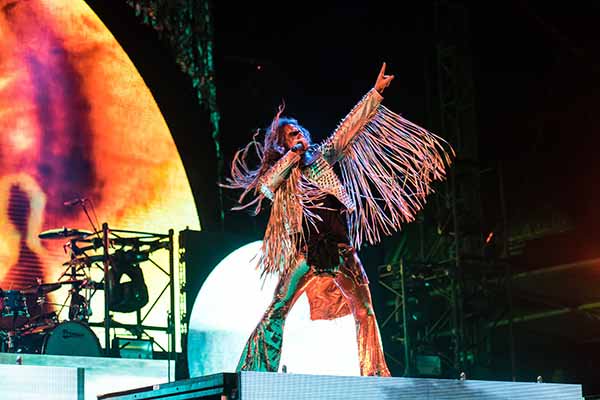 And the award for drawing the biggest crowd at the Zippo Encore stage goes to… Rob Zombie! Playing two White Zombie tracks, ‘More Human Than Human’ and ‘Thunder Kiss 65’, Rob had the crowd in the palm of his hands. Bringing out inflatable alien dolls that surfed the crowd from the front barrier all the way to the food stalls at the back, it was one of the biggest parties of the night.

An array of mind blowing visuals and footage from Rob’s extensive videography collection joined him on stage. Add this to the equation along with on stage flames, and it was one of the most thought through stage set-ups of the day. Highlights of Rob’s set included a cover of Alice Cooper’s ‘School’s Out’, ‘House of 1000 Corpses’, ‘Living Dead Girl’ and ‘Dragula’, which had the crowd singing every word back at the top of their lungs. 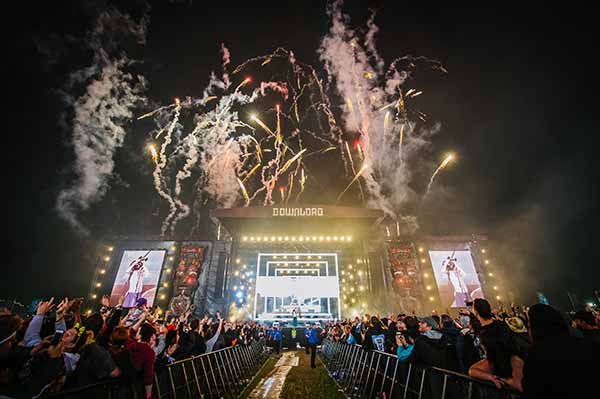 Scottish trio Biffy Clyro reigned supreme on the Main Stage on Saturday night at Download 2017. Stepping out to their long and anticipated introduction, they soaked in the crowd before elegantly sliding into the massive ‘Wolves of Winter’. It wasn’t long before their huge back catalogue of hits came out to play, either. Next up, ‘Living Is A Problem Because Everything Dies’ got the crowd lifting their feet off the ground in their thousands, and it was here they also paid homage to our Sunday night headliners Aerosmith, as they laced in a snippet of ‘Walk This Way’.

Simon Neil’s riffs on ‘That Golden Rule’ cemented the fact that this band were born to be headliners. The sheer power from brothers James and Ben Johnson on drums and bass are tight as glue.

Staggering out onto the catwalk for ‘Who’s Got A Match?’, Simon is playful and over the top. Their 18-song-set was fantastically wacky, featuring streamers at the start and fireworks at the end. If anyone had any doubts over their headlining capability, those have long since been washed away.