Download Day 1 kicked off to an epic start yesterday with awesome performances across all four stages from dawn until dusk.

Here are some of the highlights from one of the biggest days in rock calendar including our titanic headliners, Avenged Sevenfold.

Boston Manor had the massive honour of opening the Main Stage for #DL2018 and they didn’t disappoint. If anyone had planned to sleep in, those plans would have be rightly ruined as the guitar reverbs pulsed through everyone’s bodies as the band pushed into opening track ‘Burn You Up’. “Wakey wakey!” screamed frontman Henry Cox and the crowd screamed back to make sure everyone in the arena and campsite knew they were onstage.

Lancashire’s finest worked their way through ‘Lead Feet’, ‘Driftwood’ and a live debut of ‘Halo’ from their upcoming sophomore album, ‘Welcome To The Neighbourhood’. Ever gracious, the band thanked the crowd for getting up early on a Friday morning to see them before bringing their set to a triumphant close.

Avatar may command the citizens of Avatar Country, but the question on Friday afternoon was could the command the DL’ers of Donington? The thunderous chords of ‘Statue Of A King’ announce Avatar’s grand entrance onto the Main Stage as lead guitarist Jonas “Kungen Jarlsby, seated in a throne, is thrust into the sky on a towering podium as singer Johannes Eckerström, in his signature clown make up, expertly conducts the crowd from a blood red plinth.

The show is no holds bars theatrics as the band circle headbang in unison to ‘Let It Burn’ and Johannes mock drinks from a petrol can during fan favourite ‘Hail To The Apocalypse’ securing his place in Circle Of Horrors. The set comes to a euphoric close as Johannes declares, ‘You are Download and we all smell like a freakshow’, as they play out ‘Smells Like A Freakshow’ a circle pit erupts, hands go up and Donington becomes a new state in Avatar country. 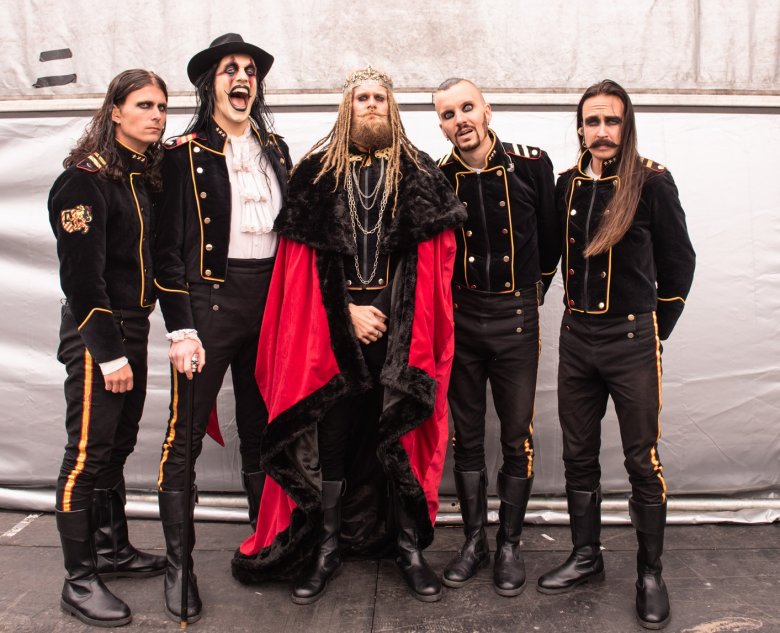 The Zippo Encore Stage gave CKY an awesome reception as the crowds stretched far to up on top of the hill. The band launched into their set with the melodic fuzz of ‘Attached At The Hip’ throwing everyone back to the halcyon skate punk days of 2002. With a shout of  ‘we are CKY from Philla f***ing Delphia” the band dropped the angst drenched crunch of ‘Flesh Into Gear’ from fan favourite sophomore album, ‘Infiltrate. Destroy. Rebuild’.

The set came speeding up to date as the band slipped in the raucous rock of ‘Replaceable’ from their latest album, ‘The Phoenix’. Singer Chad and bassist Matt teased the crowd saying ‘CKY are that band who play the song duh duh dat dum’ before unleashing as their final song ‘96 Quite Bitter Beings’ giving everyone flashbacks of Jackass eye-watering stunts and cheering for more. 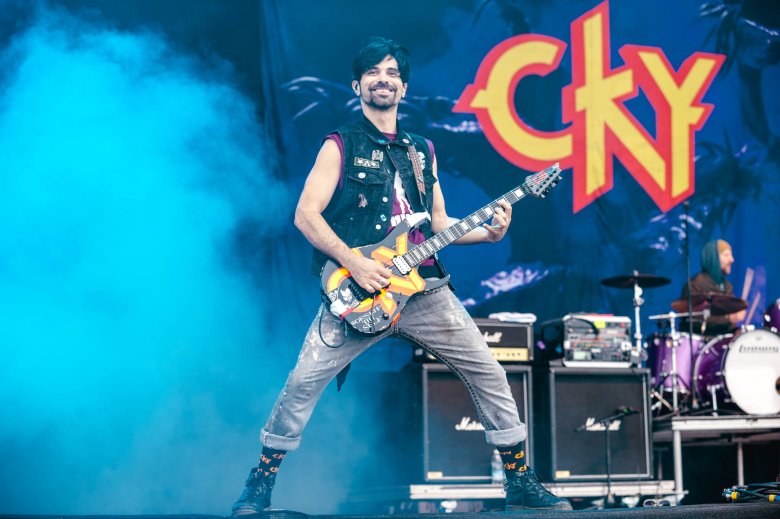 A air strum off was taking place over at the SINDROME as contestants competing in the heats of the Air Guitar World Championships. Contestants from Wigan to Brazil took to the stage in costumes that included silver capes and Axl Rose style bandanas to win over the judges and crowd with knee slides, high kicks and sick air fret work. Who will be crowned winner? Come back to the SINDROME today in the main arena for the finals to find out.

Marmozets opened with ‘Play’, fresh off of their second album, ‘Knowing What You Know Now’,  and as Becca screamed the lyrics “Don’t quit on me”,it was clear the crowd weren’t going anywhere. The five-piece family orientated band have grown up in front of the public eye since their spectacular debut ‘The Weird And Wonderful Marmozets’, but seemingly don’t look like they’ve aged a day. With less screaming and more pure hooks on the new album it seems that this is Marmozets 2.0, although today the band still have time for their raw edge beginnings as they indulge the crowd with early tracks like ‘Move, Shade, Hide’ and ‘Captivate You’.

“It’s been 5 years but you guys didn’t forget”, frontman Liam Cormier screamed as the Canadian quartet walk out to a full house at The Avalanche Stage. This year’s festival marked a special occasion for the band as their infamous album ‘Hail Destroyer’ celebrated its 10 year anniversary, so it’s was good excuse for the band blast out the title track with a fearless ferocity. At the end of the track the band’s hardcore fans screamed out the trio of ‘Hail Destroyers’ back recalling when the band were at Download for the first time back in 2007.

Of course, no Cancer Bats show would be complete without a cover of the Beastie Boys’ classic ‘Sabotage’,  which had the crowd erupting in a mass sing-a-long. From the rumbling of the opening  ‘Lucifer’s Rocking Chair’ to closing track ‘Bricks and Mortar’, the crowd scream back with such intensity and we’re sure it won’t be another 5 years before the band are back on Donington soil.

Bullet For My Valentine

After five years away Bullet For My Valentine made a storming return to the Main Stage. With two decades under their belts playing to a crowd this size is effortless and it showed as they ripped into the relentless fury of ‘Don’t Need You’.

As the guitars chugged from the stage the crowd miraculously multiplied in size as more DL’ers flooded in to witness the Welsh rock titans triumphant return. Nostalgia filled the set as the huge opener was followed up by the monster anthem of ‘Your Betrayal’ and the quickest riffs outside of Dragonforce on ‘4 Words To Choke Upon’. But it wasn’t all about looking back as band tore through fresh new tracks ‘Letting You Go’  and ‘Over It’ from their hotly-anticipated forthcoming album, ‘Gravity’. Make no mistake, Bullet For My Valentine are well and truly back.

You Me At Six

The Surrey based five-piece were potentially the poppiest band on the line up, but the You Me At Six proudly owned it as they played a set of infectious sing-a-longs and jazzy jackets in frontman Josh’s case to spice things up. Over the years the band have worked their way up on the Download line-up,  so was a seminal moment to see them headline the Zippo Encore Stage especially to such an expansive crowd.

‘Room to Breathe’ and ‘Lived A Lie’ come in quick unison as the crowd wasted no time in jumping, dancing and raising their arms, screaming in unison to a band they’ve grown up listening to. As the sun began to set the band’s impressive lighting display reached it’s full magnitude as the band burst  into ‘Fast Forward’ released just two days ago, because if you’re going to play new music as Josh says, “Download is the place to do it”.

Josh announces that it’s a 10 year celebration of a certain album before blasting into ‘Save It For The Bedroom’ making grown adults squeal. Thank you to You Me At Six for making adults inner teenagers emerge. 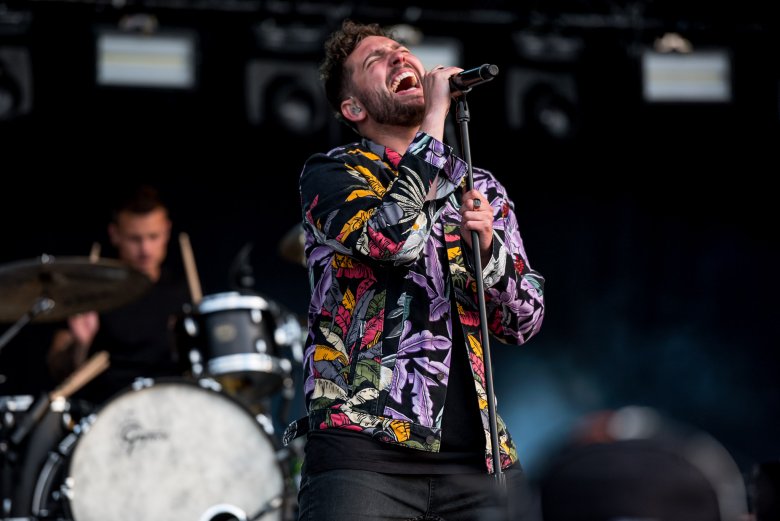 As everyone was eagerly awaiting headliners Avenged Sevenfold over at the SINDROME another electrifying headliner was taking to the stage…literally. Lords Of Lightning lit up the dusk skies, stood facing each other on two podiums mouths dropped open as they sent multi million volt bolts of white-hot electricity towards each other in The Duel 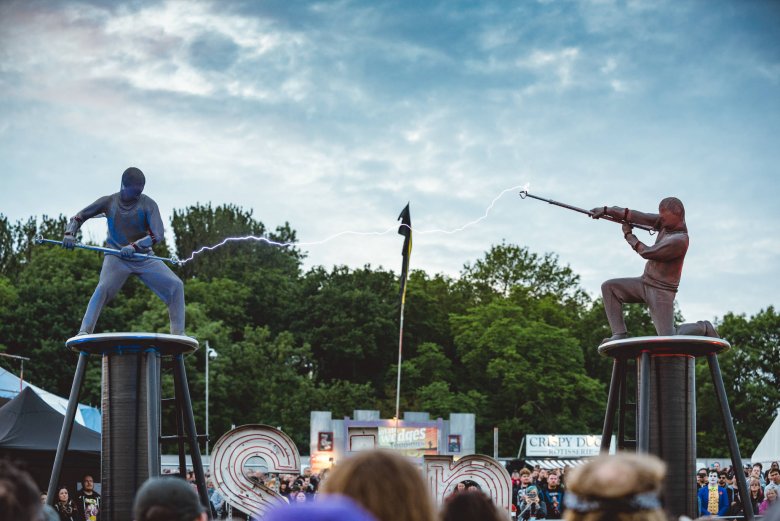 Avenged Sevenfold have said Download holds a special place in their hearts and tonight they showed it with every fibre of their being in a phenomenal two hour show. As dusk fell the ceremonious opening chords of ‘The Stage’ perfectly announced the band’s arrival with frontman M. Shadows quickly making it clear the band were here to conquer Donington shouting, ‘let’s get this party f***king started!”.

The set ricocheted with relentless energy as the band abandoned their standard set list to give Downloaders a special set of back-to-back fan favourites. Classics ‘Hail To The King’, ‘Welcome To The Family’ and ‘God Damn’ came in rapid succession with the crowd fist punching the air in unison as the pyro shot towering flames and black smoke rings into the sky. A7X showed they’re at the top of their game: the signature twinned guitar solos of Zacky Vengeance and  Synyster Gates blend in heavenly harmony and M. Shadows vocals roared with the same power as when the band erupted onto the scene nearly two decades ago.

The set took a deep breath in when the band paused to pay a moving tribute to founding member and drummer The Rev who sadly passed away. The band played the touching ‘So Far Away’ bathed in crimson light after a video was shown of The Rev saying, “they’re the best friends anyone could ask for. We’re like family, man. It’s us against the world”. It wans’t the only moment of reflection as the band later on play a tender cover of Pink Floyd’s ‘Wish You Were Here’ to raise awareness of depression.

As the night sky fell the band kicked the set back into momentum with the powerful chants of ‘Nightmare’, early fan favourite ‘Eternal Rest In Time’ and the infectiously anthemic ‘Bat Country’. A ‘you had to have been there’ moment took place when they played ‘Higher’ from their last album The Stage’ and a spaceman, so big it could take Iron Maiden’s Eddie in a fight, was lowered against the backdrop.

The band returned for a victorious three track encore with M.Shadows joking, ‘do you want a song about necrophilia’ before launching into the metal macabre of ‘A Little Piece Of Heaven’. Closing with the phenomenal ‘Unholy Confession’ and full firework display, tonight the Download family and the AV7X became one. 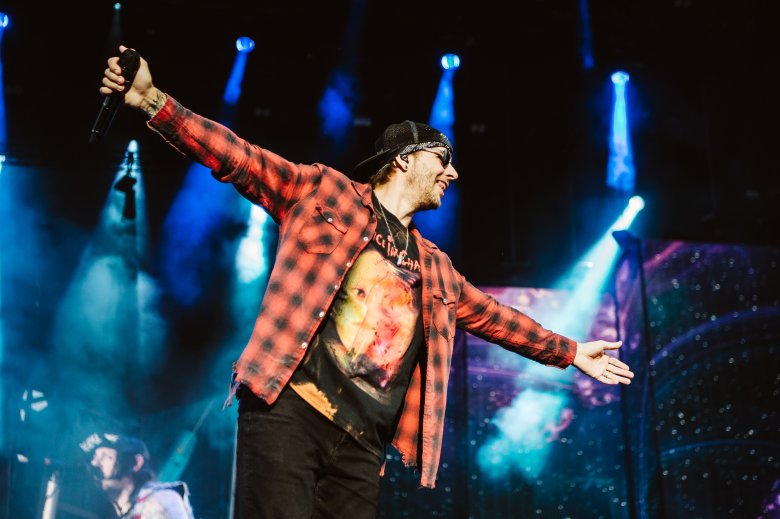 Relive the rest of Download 2018 with our Saturday and Sunday highlights articles. Missing Donington? Tickets for Download 2019 are on sale now!