In this edition of Meet The Download Team, we chat to some of the official photographers!

These guys and girls are the ones taking all those awesome shots you see all over the website. Check ’em out.

I was a web developer before becoming a photographer. When I used to build websites for my clients, I began hiring a photographer to capture imagery to accompany the content on my sites. This was when I realised I wanted to give it a go myself.

From having my first camera, I developed my skills and slowly shifted to the genre of gig photography, as I had played guitar for years and loved playing/being in front of bands.

I managed to obtain (and still have) a residency at Manchester Academy Music Venues (1, 2, 3 & Club), photographing all gigs that go on there.  Since 2014, promoters began seeing my name pop up and I got approached by Live Nation to photograph a few tours: including Lady Gaga, McBusted and Il Divo to name a few!

From there I gained many clients in the music industry. Included in this was the amazing Festival Republic. They took me under their wing in 2015, and I have been with them since. I’ve covered multiple festivals for them every year, including Download, Leeds, Latitude, V Festival & On Blackheath. They are the best bunch of people to work with and I can’t begin to explain how I have missed covering their incredible events this year, due to COVID-19.

I have had countless incredible memories I will never forget from photographing my favourite festival in the world. This includes working with some of the best people in the music/photography industry, and building amazing friendships that have meant so much to me. There are however a few pretty crazy memories that stand out.

I was pulled up on the drum riser by Art Cruz, mid set, when Lamb of God were performing on the Main Stage. Got a wide rear shot of the band and a portrait of him in action. That was pretty sick! Following this, LOG’s drum tech gave me one of his sticks, which is now up in my office.

Also, when Herman Li, of Dragonforce, asked me to get on the drum riser, at the end of their set, and take a picture of the band and the near 80k people behind them. Sometimes I seem to just be in the right place at the right time! I suppose that’s what it’s all about. 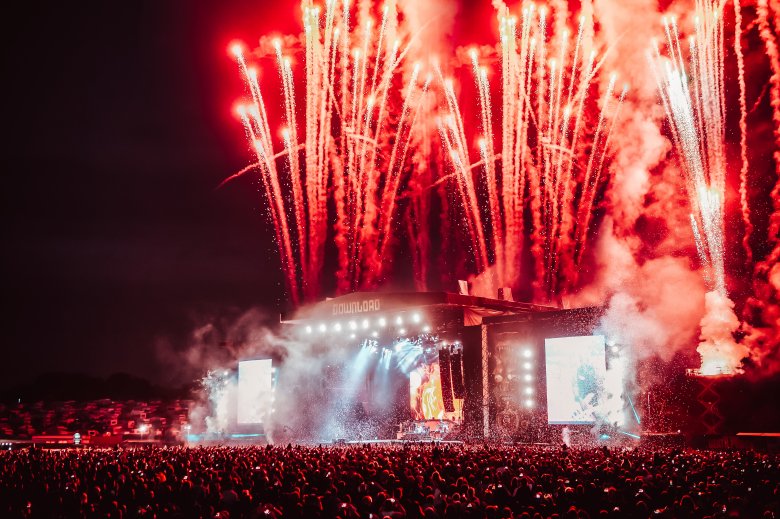 I only really started thinking of photography as something I enjoyed as a medium when I was around 16-17 years old. I borrowed my Mum’s Canon compact camera and managed to get a really cool photo of some fireworks at a display for Bonfire Night. Once I saw what was possible on this new emerging digital format, I was a bit hooked.

It sounds silly but I remember exactly where I was when I realised I wanted to be a photographer, and since that day I’ve been lucky enough to work on some amazing projects. From top music festivals worldwide, as well as within the Premier League as a club photographer, and also on cruise ships travelling the world to take photos. Photography has given me some unbelievable memories.

My favourite memory from Download is probably being on stage/backstage with Trivium in 2019. I had to work my way down the outside of the stage curtain to find an opening to try and get behind their drummer. I think my best memory is looking out on the crowd at the Main Stage. The sun was out, everyone sounded happy with their hands in the air and I was photographing this amazing super energetic band. It gave me chills. 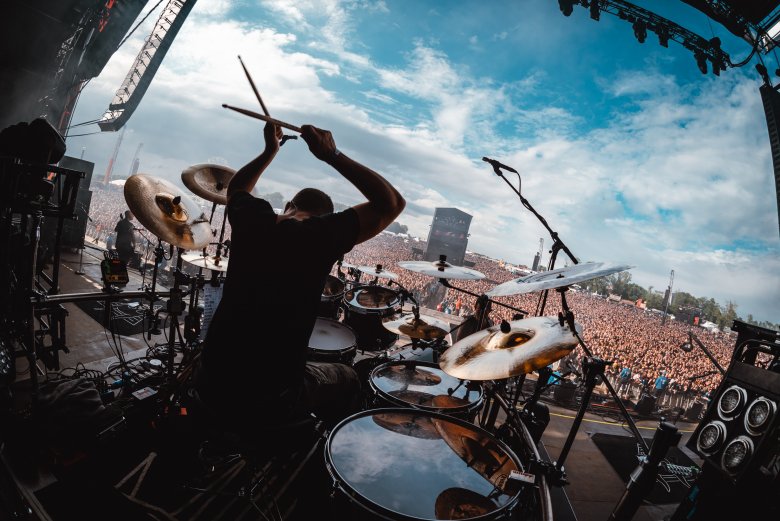 My introduction to shooting professionally was at festivals back in my native Canada. I used to belong to a stage crew that would design and build custom stages, and they brought me on to photograph our creations. Festival photography has been a defining part of my career ever since, and Download is by far my favourite festival that I’ve had the pleasure to work at. I strive to have my images make you feel like you were there – full of colour, light and atmosphere.

My favourite memory shooting at Download would be when I was photographing headliners System Of A Down in 2017. I was on the stage during their performance of ‘Aerials’, and just as the chorus started, a very large plane took off from the nearby airport and quickly passed over the crowd. It was one of those eerie and magical moments that you could never anticipate, and I get goosebumps every time I hear that song since that moment.

As a child I never went anywhere without a camera in my hand, and I had a passion for music (the louder the better). When I got a bit older I started taking my camera to every gig I went to, trying to get as close to the front as I could to try and take the best photos. It didn’t take many gigs before I was completely driven towards trying to combine my passion for both photography and live music.

Lots of hard work and many years shooting upcoming and unsigned bands in and around Manchester eventually led to the opportunities that I have today, to work for the UK’s largest festivals. Dreams sometimes come true!

I have many favourite memories of Download, most of my fondest memories come from working with the amazing production team, and the photography team that they assemble. As for the bands, I think a real stand-out memory is from last year, when Slipknot headlined the Main Stage.

While Slipknot were playing to a packed Main Stage arena, I decided to take a trip up the Ferris wheel. WOW what a view! I’ve never seen a crowd of that size, with that level of passion and energy before. I then had the privilege of watching the remainder of their set from the sound tower, to cap off what I think will remain as one of my top festival memories of all time! 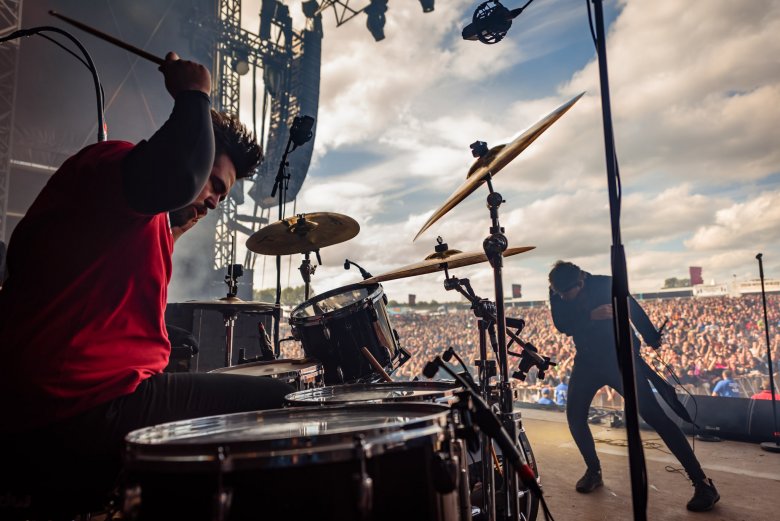 I’ve always enjoyed photography. I only really started pushing it in 2017 when I realised I could tie my main two passions of live music and photography together into a potential career. I started in Bristol with doing every show I could get a pass for, and gradually built it up to touring with some of my favourite bands and freelancing for magazines that I used to read religiously and plaster my bedroom walls with as a kid.

One was when Def Leppard’s pre-show countdown hit 10 seconds. I was shooting from the sound tower. As they were the first headliner, my excitement for the weekend was really starting to kick in.

Another is the Download Dog Walk, I don’t think everybody gets to do that so I was honoured to be there! Seeing everybody’s happy faces at seeing ‘The Dog’ was great fun.

Finally, shooting Power Trip on the Download Main Stage. It wasn’t on my schedule but I managed to squeeze it in. I really wanted to shoot them and I’m so happy I got to.

To be honest, the whole weekend was a highlight; I had so much fun! 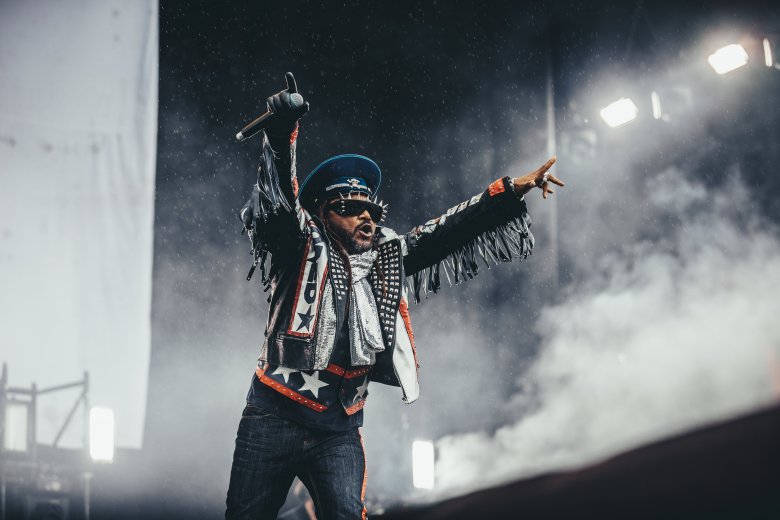 Download 2021 will be headlined by KISS, Biffy Clyro and System Of A Down! It takes place on 4th-6th June in Donington Park. Tickets are on sale now.