It’s the Download Dog ‘ere and as a Halloween treat I’m going to share with you how to survive a zombie apocalypse.

So, strap in and get ready to crush some zombie brains.

Get together a badass team

Think of facing down the zombie apocalypse like the last day of Download: you’re sleep deprived, nursing a three day hangover but you’re determined to stay alive to see the headliner. So, you’re going to need a rock hard team to get you through: 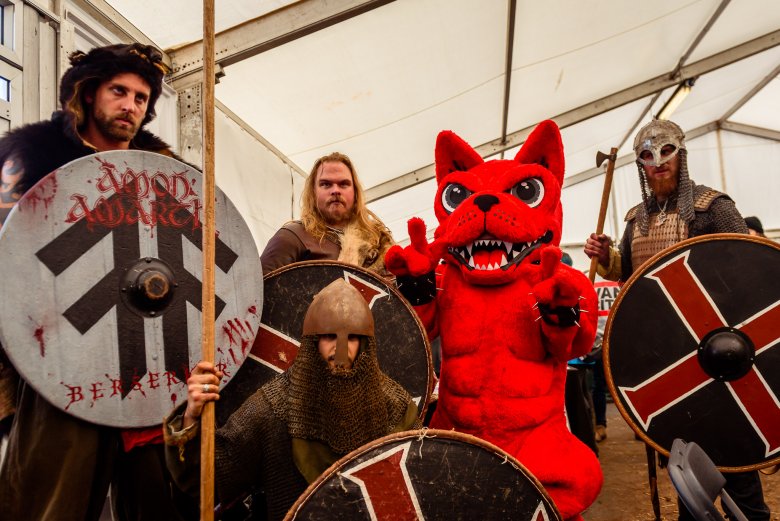 Firstly save this woofingly good article you’re reading to your phone. Secondly, write down where your nearest supermarket, hospitals and petrol stations are located. Thirdly, work out all the exit routes from your town, so you can leave faster than me running for a frisbee.

No, not that Tool, I mean weapons more deadly than my gnashers. We all know the one way to kill zombies is to their destroy their brain. So, you’re going to need an arsenal of weapons that’d make Zombieland’s Tallahassee drop his box of twinkies.

Reenact my favourite scene from Evil Dead II by attacking your enemy with the full might of a chainsaw. Groovy.

Take some tips from the Demolition Download crew and slay some zombies the old fashioned way.

My mates at Area 51 know a thing or two about fire and if a zombie was coming their way it’d be their weapon of choice. Zombie burgers, anyone?

If you’ve watched Zombieland you’ll remember that iconic scene where Tallahasse takes out a zombie with banjo. We’re more rock than that, so we’ll be borrowing Gene Simmons’ Cort GS Ax Punisher bass guitar to smash some skulls.

At #DL2019 I met Amon Amarth’s viking mates – the berserkers. Those lads had me swapping my bone to try out their ancient axe. And, let me tell you it would make a pawsome weapon against any hungry zombie.

You’re going to need to find a base that feels as safe and secure as my triple A dog kennel at Donington Park. So, scout out potential locations now with the same precision you use when picking out your camping spot at Download. Here are some of my favourite hideout locations:

The Mall has always been a classic hideout from evil in film and TV. It started with Dawn Of The Dead in 1978 and was used as a refuge this year for the third season of Stranger Things. But, why the mall? It has endless supplies, plenty of windows for zombies to crash through and  more dog toys than you can shake a stick at.

Who doesn’t feel safe in a pub? With all those delicious snacks on the floor to gobble up, woof. And, as Shaun Of The Dead showed it’s also an ideal spot to bag when the zombies come knocking.

Cornell University researchers revealed that according to statistics staying in a rural location is a good choice when the zombie apoacalypse hits. Why? Because the virus is likely to spread faster in a urban area than a rural area. Also, it was the hideout of choice in seminal zombie movie The Night Of The Living Dead.

Nothing feels safer than your own home, especially when you get home after five days of rocking out at Download. So, when the apocalypse hits your own gaff might be a good place to be.

You know where the exits are, what stairs to push zombies down and what weapons are to hand. Just remember to barricade the doors and windows.

When faced with a the prospect of the end of the world and becoming a blood dribbling zombie, you’re going to want to freak out. But, you must stay calm to survive.

So, get your brain in shape before it becomes zombie takeout by practising some mindfulness. I sat crossed pawed to do Mind The Dog at #DL2019 and since then I’ve not bitten Andy Copping’s ankles once. Fur’real.

Have a killer soundtrack

If horror movies have taught us anything it’s that you can’t face a zombie apocalypse without a killer soundtrack. We’ve got you covered on this one as you can explode some skulls by blasting out the Download 2020 Playlist and our Halloween: Resurrected Playlist.

Nothing is going to send zombie brains flying out of their ears quite like System of a Down’s ‘Mind’ cranked up to 12.

Join ’em. Well, not literally. Just pretend to be a zombie like living icon Bill Murray in Zombieland. But, make sure everyone knows you’re actually human or you’ll end up being blown apart like old Bill.

When trying to pass as a zombie fails – RUN! If you can run from the second stage to the main stage in 60 seconds at Download, you can leg it from a brain-thirsty zombie.